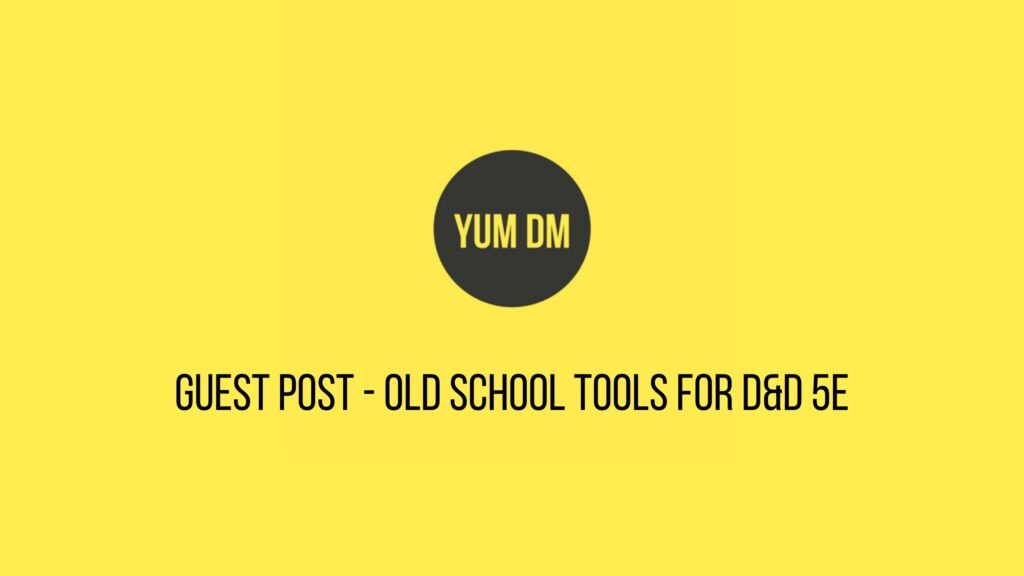 There are some approaches to gaming that are common or assumed by players and Dungeon Masters of earlier editions of Dungeons and Dragons.

The versions of the game published by Wizards of the Coast were built on different assumptions. New fashions of play style came about partly because of the rule sets and partly because of generational differences between player groups.

Fifth edition, as a rule set, went back toward some of the ideals of earlier editions in its rule design.

It seems to me though, the culture of play and play styles of many groups are closer to 3rd and 4th edition than the older style of play. If you’ve never played earlier editions, there are some elements of play you might consider experimenting with in your 5E games.

One characteristic of play that emerged in 3rd and 4th edition and carried over into a lot of 5E play is the tendency to reach for the dice first.

Players and Dungeon Masters alike have developed the habit of making mechanisms their tool of interaction with the setting. It is not uncommon for a player to roll a twenty sider, report the result modified by a skill on their character sheet and await narration from the DM. This is the opposite of old school play.

In earlier edition play, the play cycle is:  The DM to give a description of the situation the player characters find themselves; players ask questions about encounter (combat, social or environmental); describe their actions to the Dungeon Master; the DM asks questions to clarify and make sure they understand the intentions of the players; when everyone is clear about what is happening and how the DM then determines the outcome of the player’s actions via the games mechanism or by making a ruling.

If a player asks the right questions and comes up with a practical way to solve the obstacle in their path or to give a NPC what they want, a die roll might not be necessary.

The character can succeed in the objective of the encounter, avoid danger, or gain an ally and never touch their dice. In lieu of automatic success, a significant modifier or advantage might be given if the player does something to improve the chances of success.

In old school games, players do everything possible to stack the deck in their own favor by interacting with the fictitious mental construct of the game world to influence the possible outcomes of the game mechanisms.

The character creation and advancement mechanisms of 3rd, 4th and 5th encourage a build mentality. That is the player will “build” a character that is capable of handling nearly any encounter.

1) Resist the “build” mentality. Make characters that have a set of skills and abilities where they are the party specialist in a particular area.

2.)  Make an effort to work as a team by playing a supporting role as often as you can.

By giving away the credit and being a helper you enhance your comradery as a group. Everyone will come away from the table feeling good about how they have worked together to overcome the obstacles placed before them.

Dungeon Masters create varied challenges that require specialization and teamwork. Make problems that the player characters must combine their abilities to overcome.

Also make problems that require specializations that don’t involve combat such as tracking, lock picking, climbing/flying, negotiation, spying, sneaking, disguise and so forth. I frequently see posts about how some class is broken because they can’t hold their own in combat.

If the DM is producing challenges that are varied, require a specialist and require the combination of different specialists, the cohesion of the game group will be increased.

Dungeon Master’s tell stories and use the tools of storytelling but in my experience the players will achieve the highest levels of engagement if you don’t set out to tell their story, or worse “your” story.

Emergent narrative is the story created from the actions of the players during the game.

Notice that I didn’t describe plot lines, story beats, or predetermined outcomes. When I drop adventure hooks into my games, I am uncertain which hooks the players will grab onto and how they will approach them. I do not create a path down which the player characters must travel.

The story emerges from play. It is not predetermined.

There are many benefits of this approach, my favorite is that I am just as surprised by the outcomes as the players are.

There are many other ways to incorporate “old school” ways into your Fifth Edition game this will get you started. Talk through the encounter before you roll the dice. Encourage teamwork by creating challenges that require the combined abilities of different specialists. Embrace the emergeant story by creating objectives and challenges without predetermined paths and outcomes. Let play take shape organically.

If you would like to learn more about some of these techniques follow my blog or join my monthly newsletter where I write about these topics.