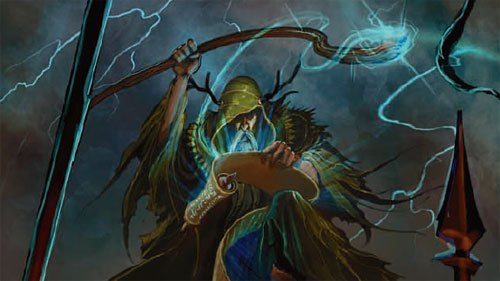 We all should know that Dungeons & Dragons has various editions that span five decades.

But what you may not know is that each edition has its own feel, vibe, and power level.

Generally speaking, with each edition (not including 4th) the power level of the game has increased.

In other words, characters (and monsters) start out and become more powerful much sooner.

What I would like to do in this post is explore the idea of past editions being past eras or epochs in your campaign world, rather than just older versions of the game you over-write.

This would mean that the 2nd edition of D&D, for example, may have been how your campaign world was a thousand years ago.

But before we dive into this idea, we need to look at what are the various editions of D&D.

To keep things simple, I am going to start with AD&D, which was published in 1977. With this in mind, we have five editions of the game (six, if you include 3.5):

^ I will not be talking about 4th edition much in this article as I don’t know much about it (I skipped it completely) and so I am not sure what the power level was like.

Through the years and the various editions the game evolved and generally speaking, characters (and some monsters) became more powerful a lot sooner.

If you look at the classes from AD&D and those in 5th edition, you can easily see this power increase.

The mage or wizard is a classic case.

And once that spell was used you had to rely on ranged weapons or god-forbid, melee – there were no regaining spells after a short rest (as there was no short rest).

And to add to that, magic-users were limited to using just three weapons: staff, dagger, or dart.

And this can be seen with most of the other classes as well – compared to their D&D 5e equivalents, characters were much weaker.

First level characters is 5th edition would be way more powerful than their equivalent in AD&D.

But this leap wasn’t sudden – the classes had four more editions to move through before they got to 5th edition level of power.

And this is the key to what I am looking at here – characters and their power-level have evolved over time, just like in our real world.

If you follow this line of thought it is not too much of a stretch to imagine how much more powerful (stronger, healthier, more knowledgeable) characters are in 5th edition verses past editions.

And this is why you can think of past editions of D&D as eras in your campaign world.

Characters – people – have evolved better knowledge and magic (analogous to  technology in our own world) and therefore are more powerful.

To highlight my point let’s look at some examples.

And none better illustrates my point than magic.

As my example above showed, wizards in AD&D are far inferior to those in 5th edition.

But how were they better in each edition?

I have mentioned two things already:

But there are other ways as well.

The spells themselves are much more potent in D&D 5th edition than in AD&D.

For one, cantrips (if they were available at all – they weren’t part of the game until Unearthed Arcana was released) were much much less powerful.

To give you an example, here is a typical cantrip from AD&D:

A cantrip of this nature allows the caster to cause non-living liquid or solid material to become about 40 degrees F. cooler than it was, subject to a minimum temperature of freezing. The chilling effect lasts but an instant, after which the subject warms slowly back to normal temperature.

Now here is an equivalent cantrip from D&D 5th edition:

A frigid beam of blue-white light streaks towards a creature within range. Make a ranged spell attack. On a hit, the target takes 1d8 cold damage, and its speed is reduced by 10 feet until the start of your next turn.

As you can see, cantrips have come a long way – they have gotten a lot more powerful.

And wizards in D&D 5th edition gain three of these at first level and can cast them as many times as they like in a day.

A wizard (or magic-user) in AD&D could have four of these (much weaker) cantrips, but only by sacrificing a first level spell!

And given an AD&D wizard only gains one first level spell at first level, that means she would simple have four cantrips instead.

(Actually, this may be something you want to explore for 5th edition – giving a wizard an options to take more cantrips instead of a first level spell.)

Staying with spells for a moment longer, wizards in D&D 5th edition also start with two first level spells – double that of wizards from AD&D.

And those spells are sometimes much more powerful.

In AD&D it shoots out a fan of flame from the casters hands out to 3 feet in front of the wizard for a massive damage of 1 per level of caster. Yes, you read that correctly and it isn’t a typo – just 1 hit point of damage at first level.

In D&D 5th edition, the spell burning hands shoots out 15 feet in front of the caster for 3D6 points of damage (half if saved).

That’s some increase in power!

Interestingly, the magic missile spell has pretty much remained the same, damage-wise (although you gain more missiles faster in the later edition).

So, how does one explain these changes if AD&D is now a by-gone era?

Quite easily: wizards had time to understand the intricacies and knowledge of magic and have created more powerful versions of the same spells.

Just like in our real world we understand the components that make up a computer better than 20 years ago, so our modern computers are much more powerful (and more compact) than they were then.

Or maybe, in relation to the burning hands spell, the reason for this is that wizards learned how to tap into the fire element more easily, or maybe the elemental plane of fire is just a lot more accessible in the latest era.

Let’s say you make the era of AD&D exist 300 years ago in your campaign world.

This means that 300 years ago wizards (who were called something different by society then as magic wasn’t as well understood by the general populous) were only just starting to understand the power of their craft.

You could also say, AD&D 2nd edition was 250 years ago – some time had passed and allowed wizards (then called Mages) time to perfect their craft while more people took up the studies to become a wizard, which led to specialty schools (a rule that was added in AD&D 2nd edition).

Then, only 150 years ago, there was a great magic renaissance and wizards (who were now call exactly that) gained great power and their spells and other powers grew greatly – D&D 3rd edition starts.

Fifty years later there was a correction and magic was again advanced – D&D 3.5 edition.

And then, only a handful of years ago, a great magical upheaval occurred with a surge in power for the god of magic. This, in turn, created wizards to gain greater insights into their mystical craft and become even more powerful.

As you can see by this example, you can not only place the various editions of D&D at different eras in your campaign world, but also create role-playing reasons for it.

Maybe there the god of magic gained in strength and so too did the wizards. Maybe there was a cataclysmic event that boosted the power of mages all over the world. Maybe there was just a spontaneous out pouring of discoveries by various wizards throughout the known world.

Whatever the reason, the basics of this remains the same – that the various editions of D&D can be used as eras in your campaign world.

And this can be see in other areas of your campaign world as well.

Fighters and other fighting types have also become much more powerful over the various editions.

Fighters in AD&D were fairly straight forward – they basically differentiated themselves by what weapon they chose to use.

By D&D 3rd edition fighters could use skills and feats (as well as class powers) to not only differentiate themselves, but also gain in power.

In D&D 5th edition, fighters are even more powerful.

Fighting techniques have changed and become easier to do.

It went from something no-one did to something anyone can do.

In AD&D second edition, for example, it imposed some harsh penalties if you tried to use it, which could be off-set by character abilities and/or weapon proficiencies.

In D&D 5th edition, everyone can pick up two weapons and start slashing!

This is something that can be explained by practice and training over time.

Two-weapon fighting was something that gave fighters an advantage if they could perfect it, and so much training was done and it was incorporated into many fighting styles.

So much so that it became a standard technique that was taught and so most people understand how to use two weapons in a fight.

This is just one explanation.

Other aspects of the game have changed as well.

Healing – both magical and mundane – is much better and quicker in D&D 5th edition.

This could easily be explained by more powerful magic and enlightened heal and first aid techniques.

Barbarian, Sorcerer, Warlock – they are all new to the world and can be explained by increased communication and trade, changes in magic, and finding new powers to deal with, respectively.

New races are also available – tieflings, aasimar, and genasi – all new playable races. Not to mention the humanoid races, like goblins and the even more exotic.

These can be explained by new races coming to the world via the planes or their familiarity and commonality increasing over time.

Monks are much more powerful than before.

They have become much more enlightened through their studies, and as such have unlocked new powers and abilities.

Leveling up has become easier and quicker too.

This can be explained by the fact that people are more enlightened and smarter generally and so gain access to new powers and skills a lot quicker than their great grandfathers did.

And there are many more examples as well.

Having said all this, there are ways this doesn’t fit or make sense, but I think there is enough that does fit, to make this a viable option in your campaign world.

And is something that is much better than simply over-writing an older edition with a new one and then being forced into explaining why things are different.

So, why do all this in the first place?

I like the idea that you could play various editions of D&D in the same campaign world but at different periods in history.

You could play a D&D 2nd edition dungeon crawl that was set in 980DR in your campaign world, and then the next campaign could be run using D&D 3.5 some 150 years later in 1130DR.

It would be interesting for someone who playing an elf or dwarf who is still alive from one era to the next and how they would deal with the changes – it could explain a lot about what they have been doing over the last 150 years and how they have improved.

What do you think? Is this something you would consider introducing into your campaign world?