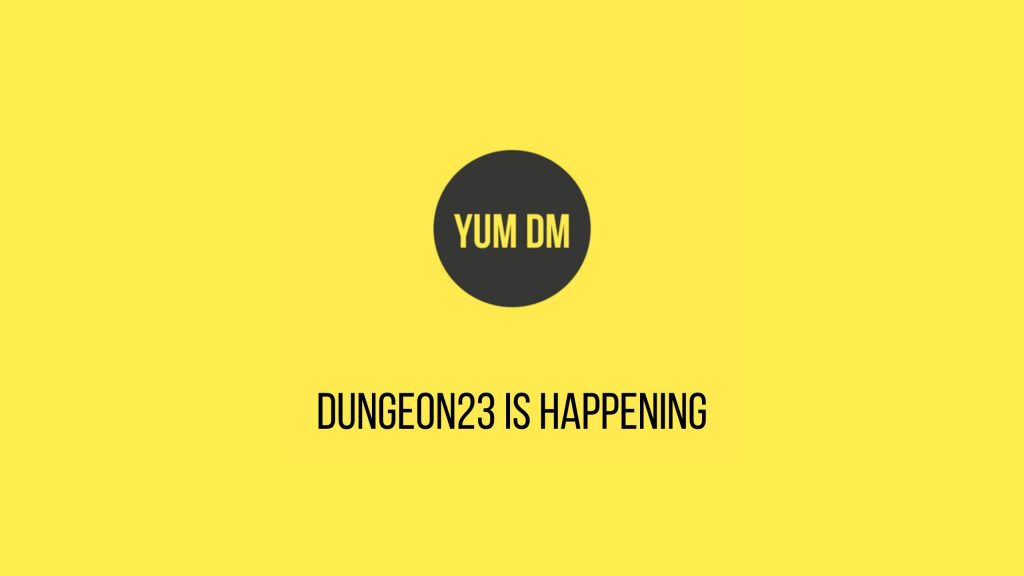 I have decided to do #Dungeon23.

If you are unfamiliar, #Dungeon23 is the brainchild of Sean McCoy who has set a challenge of building a dungeon area each day of 2023 with the goal of having a mega-dungeon by the end of the year.

I didn’t want this to be a series of random rooms strung together, so some planning is required – and this blog post with outline my thought process on this planning.

I also have another blog post to keep you updated on my ongoing thoughts and achievements.

The first thing I needed was a good theme.

And I had one bubbling away for a while now.

Back when I GM’d 5e, I ran a one-hour lunchtime session which was a dungeon crawl exploring an ancient city that was buried after a cataclysm.

That city was the magical city of Dekea.

In my campaign world, Dekea was a true renaissance city, pushing thought and knowledge to new heights. Every area was explored and boundaries pushed, and this included magic.

Dekea was the home to a large population of mages who pushed the boundaries of what magic could do. It was because of this that it suffered the most, and bore the brunt of, the magic cataclysm when magic ceased to exist.

The city fell apart and was largely destroyed and sunk into the earth by powerful explosions. The city was buried – left to rot in the ground. Unsavable.

Even its location was lost.

Until now, that is.

A priest of Banoth (the deity of knowledge and wisdom), discovered in the journal of a dead explorer, mention of an entrance to the lost city of magic.

Interested in this, but lacking the skill necessary to explore it, and wanting to keep this hush-hush for now, hired a group of PCs to explore it for him.

With the theme well established, next comes the structure of the dungeon.

I wanted this dungeon to be a mix of styles.

Meaning, I not only want ancient streets and laneways turned into passages and rooms, but also have this intersect with natural caverns and passages, as well as crafted tunnels by the dungeon’s denizens, plus creature-made tunnels, like the tunnel created by the purple worm.

I hope this patchwork of styles will keep the dungeon interesting, and it will allow me to perhaps section off parts of it for the various factions in a more clear-cut way.

The kobolds stick to the old city and never explore the tunnels that were dug by the derro. That sort of thing.

The other part of the structure I am considering is around the number of levels.

I like the idea of 10 main levels with sub-levels dotted throughout.

This, in theory, could take you from 1st to 10th level, which is usually the max for most old school games (and most modern games too).

I will be abiding by the notion of levels of the dungeon equating to the level of the threat – mainly because I haven’t ever done this, and also, it seems like it would fit with this project.

Assuming 10 main levels, that’s 36 rooms per level, which is a lot.

However, I am looking at a number of sub-levels as well, which will push this average number down.

Let’s say 20 sub-levels of roughly 3 areas each on average – this totals 60 areas. Which leaves 305 areas for the main levels, or 30 areas on average per dungeon level.

I do imagine a bit of a bell-curve with this: less areas on the upper (lower) levels of the dungeon, more in the mid-levels (or may just more sub-levels), and then fewer again towards the deeper levels.

Of course “level” is a subjective term and could mean a regular level or a part of another plane of existence, or whatever my imagination comes up with.

Obviously, all of this is just theory and will likely change once everything starts to get built out.

I think I will map this all by hand.

This is for a few reasons.

I am not artist, but I can draw a legible map. Not an artistic one, but a half-decent one.

And I do want to get better at it. And this requires practice. And this challenge will give me that!

Also, I think I will be able to be a little more freer with the design. With hand-drawn maps I can really get creative with the layout and certain areas – something creating it online or with a mapping program won’t give me (at least with my limited expertise with them).

I will definitely have an idea about the entirety of each level before starting, however.

Knowing how many areas there will be and creating factional areas within that level (and maybe multi-level) before I get into the nitty-gritty of creating each area.

For example, if the kobolds control five areas which used to the market district of the city, then I know when I come to designing those areas that they will have been altered to accommodate the kobolds and will predominately have kobolds in them.

I will being creating a cross-section map as well.

This will be my foundation map that I use as my guide for creating the various levels.

I am hoping it will anchor me too – not letting me get too carried away with one level at the expense of other levels, and keep me on track.

These are just my initial thoughts. What did I miss? Let me know in the comments below.