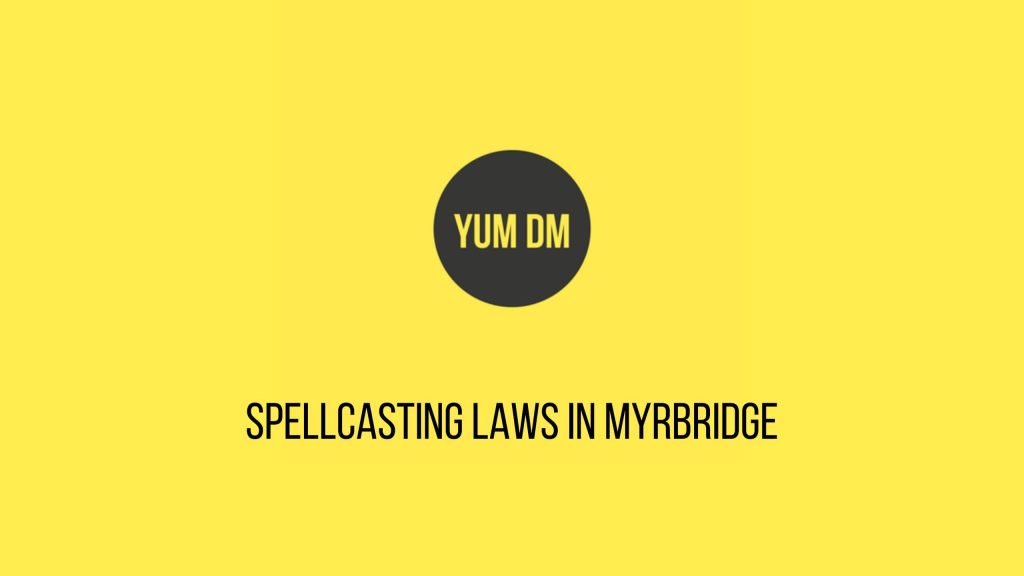 In my blog post on how governments could react to spellcasting and spellcasters, I spoke about how Nations would view and regulate spell schools and casters, in general.

In this post, I want to give an example from my own campaign world on how to apply laws for spellcasting by showcasing how the city-state of Myrbridge handles this.

I haven’t defined specific jail sentences or fines as I find this will depend on the severity of the infraction.

It would be a good idea to have a broad range of fines and prison sentences in mind for this sort of infraction, but that will differ from place to place and government to government.

To give some context, I have a small intro on Myrbridge itself.

Myrbridge is one of the five city-states that dominate the Freelands. It is also known as the City of Bridges as it sits on a series of cravasses that drop miles into darkness below the city streets. Numerous bridges criss-cross the city, spanning over these chasms.

Each of the landmasses that lay between these fissures make up a separate ward.

Each ward has its own feel and tone and is watched over by a Warden. These Wardens act as both leaders for the people and also judges in disputes within the ward. A Warden is elected every 5 years.

Myrbridge itself is governed by a High Chancellor who looks after the city-state as a whole. Most laws flow from this level of government but Wardens can interpret the laws as they see fit.

The city itself is generally well patrolled – either by the nation’s Myrmidons or the more local Watches within the wards – and laws are well enforced. Some of the Nation’s revenues are born from laws and the associated fines and levies associated with them.

One area of the laws within Myrbridge deals with spellcasting.

Spellcasters are free to enter Myrbridge, and no restrictions are placed on them within the city or at the gates, but spellcasting is highly regulated.

Any spells cast within the city needs to be cleared by a warden or higher official and a fee paid if the spell being cast is deemed necessary and is non-detrimental. This means that one spell could be cast in one ward, but not in another.

Even when a licence is given to an individual spellcaster, this is usually only for a limited time or number of spells cast, say for a celebration or event that is state-sponsored or endorsed.

This is true for both arcane and divine casters within the city’s walls.

Temples pay an annual tax to the government in lieu of paying per spell, and this allows all priests under their care to cast spells to help those in need. This is also why temples within Myrbridge charge for any spells cast – to help offset this significant cost.

This can be a double-edged sword however, as the temple is held responsible for all damage or death brought about by any spells cast by a cleric or other member of the church.

Mages who also live within Myrbridge can apply to pay an annual tax in a similar way, but this is only granted to long-term residents of the city-state and is carefully reviewed annually.

Casting Without a Permit

Those caught casting spells without a permit or permission of a government official will be arrested and tried in the ward where the casting took place. The Warden will issue a judgement based on the situation and any evidence provided.

Some leniency is shown if the caster can prove that the spell cast was not malicious or was in self-defence or benefitted the city or a citizen in some way.

A fine is still usually forthcoming no matter the reason.

Repeated castings by the same spellcaster will usually equate to prison time or, if the casting was particularly egregious, the caster’s death may be ordered.

These are general rules, but Wardens and other officials usually give stiffer penalties to those casters who cast spells from certain schools of magic.

The heaviest punishments are given when the spells from the following schools are cast:

To help you understand how these restrictions and penalties can be applied within the city, here are three examples.

Tenaziir, adventuring cleric of Lucindar (deity of the sun, fire and rebirth), casts a Cure Wounds spell on a bartender who was injured when assassins attacked him and his companions.

This spellcasting is completely legal as Tenaziir is a citizen of Myrbridge and is a member of the church of Lucindar, who have a temple in the city. The temple pays a fee each year so its members can cast spells such as this.

Aeros, an illusionist (who tells everyone he is a conjurer) applies for a permit to cast some minor illusions to amuse a crowd at an upcoming street festival in the ward he is staying in.

As he is not a citizen of Myrbridge (he was born and resides in a small town outside the city) he needs to be sponsored by a citizen of good standing – in this case Tenaziir from the example above – and would also need to pay a one-off fee. This would give him the right to cast a specified number of spells from the mentioned school(s) on the particular day of the festival.

While visiting the city, Darromin, a dwarven priest, is accosted by a gang of thugs. In defending himself, he casts a number of spells and manages to kill two of the thugs and makes the other two flee for their lives.

The city still fines the dwarf for unlicensed casting of spells (a separate fine for each spell cast), but given the reason for casting and the circumstances in general, the fines are fairly low. But his name and likeness are kept on file in case he decides to cast more spells in the future.

As you can see, you can apply several different levels of restrictions and penalties on spellcasters. This is not meant as a penalty for being a spellcaster – just the reality of living in a world where spells and magic, in general, could easily bring down empires.

Do you have similar laws in your campaign world? Let me know in the comments below.

2 Replies to “Spellcasting Laws In Myrbridge”