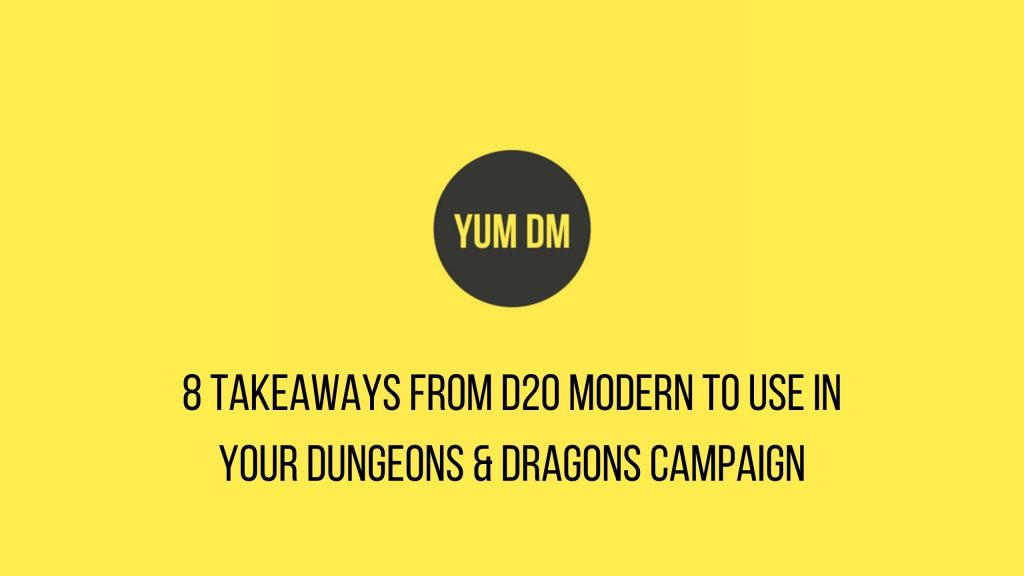 If you are not familiar with D20 Modern, it is a system that came out at the height of the D20 boom in the 2000s, which was powered by D&D 3rd edition.

I never got into D20 Modern at the time, although I did have a copy which I skimmed through, but I managed to grab one off on eBay recently, and found some gems in there.

Here are my 8 take-aways from D20 Modern to use in my Dungeons & Dragons campaign.

D20 strips away any pretence that D&D has around classes and builds them based on the six abilities (strength, constitution, dexterity, intelligence, wisdom, and charisma).

This is simple and brilliant, and it allows you to choose a profession (basically a background) on top of this.

In additon to this, each class has a few talent trees specifically for them.

The wisdom-based character, or Dedicated Hero, would have access to an empathic talent tree, healing talent tree, and insightful talent tree. Each tree has 3-4 traits you gain as you level up.

I like this way of looking at classes as you can then apply your profession on top of it. So, you could easily create your strength-based fighter or your dexterity-based fighter easily.

Incorporating this into D&D would be a big shift away from the established classes, but it’s a fun way to build characters and gives you many options.

Allegiances are a replacement for alignment in D20 Modern.

And it’s a good one.

The books describes them as:

The allegiances are indications of what your character values in life, and may encompass people, organisations, or ideals.

You select up to three allegiances from the following list:

For example, you may have an allegiance with a smuggler, the thieves’ guild, and the church of Arinix (deity of luck).

During the game you then act in accordance with these allegiances.

For example, you may side with the thieves’ guild when confronted with whether to turn in a member to the authorities or not.

This may bring you in conflict with NPCs or even your fellow party members.

Action Points provide you with the means to affect game play in significant ways.

They basically do one of two things in-game:

When you spend an action point for number 1 above, you roll an additional D6 and add that result to the total.

The number of dice you roll increases as you level up, but you only ever add one of them. So, at 7th level you get to roll 2D6 and take the higher of the two results. At 15th level you roll 3D6 and apply the highest result.

There are some great feats (think 3rd edition feats, not 5e feats) that are not in the D&D book that probably should be, as listed below. The first list basically adds a +2 to two skills based around the feat concept.

For example, if you took the Attentive feat you would gain +2 to both Investigate and Sense Motive checks.

The second list are feats which give some good martial abilities, or makes you rich.

Instead of tracking individual dollars, D20 Modern gives you a single number.

Called your Wealth Bonus, it is added to a D20 roll each time you want to purchase something. And each item has a difficulty number (DN) associated with it.

If your wealth bonus is equal to or greater than the DN of the item, you can automatically purchase it without rolling.

For items above your current wealth level, you will need to meet or succeed the DN on a wealth check to acquire the item.

Your wealth bonus moves up and down as you purchase something or gain more money.

This could easily be ported over to D&D, but you would need to come up with difficulty numbers for each piece of equipment.

You use this skill to learn information from books or similar sources.

This is a great skill to introduce as it will send a signal to, and encourage, players to research people and places before the adventure even begins.

This may give them some insight into what they will be facing, and may even save their lives.

This is a bit of a bonus, but there is a great NPC trait table included in the book which lists 100 traits in a table you can roll randomly for.

Great for those impromptu NPC moments!

This series of pages guides you through making up a new monster.

This is the stuff that should really be in the D&D DMG!

Once you come up with the basic concept, the book takes you through the process of creating it, giving you the attack bonuses, saving throws, proficiencies, and traits for each creature type (magical beast, undead, etc).

This is an easy and fast way to create some new monsters.

That’s the list, let me know your thoughts in the comments below.

Well, what would you incorporate into your D&D campaign?