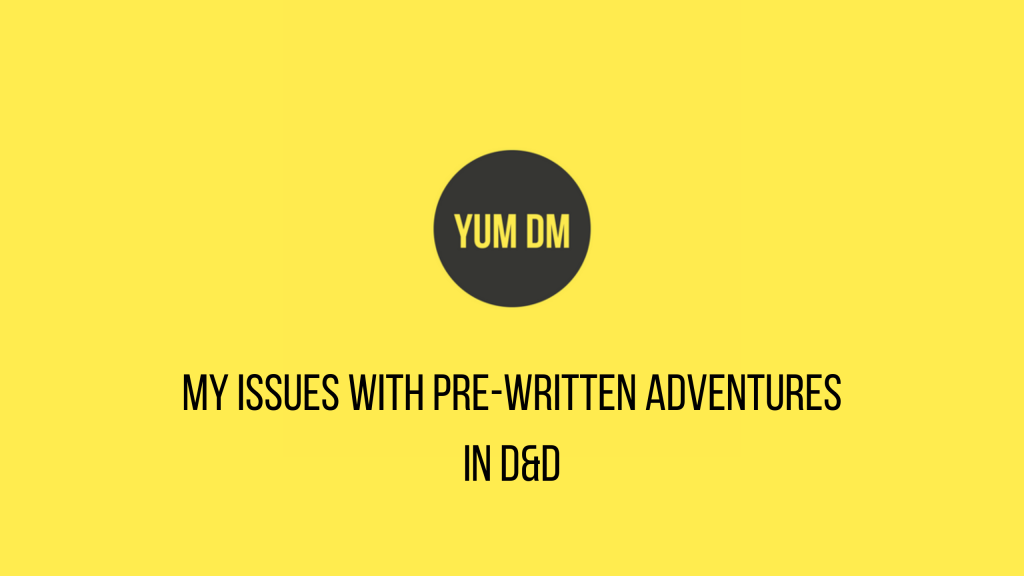 This is an old adage in creative arts live movie-making and writing.

It generally means that a movie, for example, is better when you show the audience what has happened, rather than telling them – via character dialogue (or the dreaded voiceover).

Wikipedia has a nice defintiion:

Show, don’t tell is a technique used in various kinds of texts to allow the reader to experience the story through action, words, thoughts, senses, and feelings rather than through the author’s exposition, summarization, and description.

If you are still unclear, there is a great video on this which compares the starts of both Star Wars: The Force Awakens and Star Wars: Rogue One which illustrates this point nicely.

What’s this got to do with Adventures in Dungeons and Dragons?

I think this ties in nicely with my thoughts on pre-written D&D adventures (or modules in the old school parlance). And their opposition to more location-based material).

At this point, I will be upfront about my general thoughts on pre-written adventures: I am not a huge fan.

Not to run any way.

I have never really run one as written and usually just take them apart and use them piecemeal. A map here. An idea there.

You get the idea.

I prefer a more open world approach to gaming, which is why I always look for products that give me locations and cool ideas over a straight adventure.

Products that show me, rather than tell me.

The Issues with Pre-Written Adventures

These are some of the issue I see with pre-written adventures.

And that’s not to say there isn’t some good in them, but I wanted to focus on the issues (as adventures are pretty much the norm currently – but more on that later).

Issue 1: Adventures are Too Linear

The issue with pre-written adventures is that they tend to be very linear.

Get the mission – go there – see them – kill the dragon – find the McGuffin – and then go there.

Even adventures that seem non-linear, really are (I am looking at you Storm King’s Thunder).

A couple of different choices doesn’t an open world make.

The characters are also told, in effect, what they need to do to “win” (beat the BBEG, save the village, and so on).

And the players generally play along.

The Alexandrian does a good job explaining the issues with this and the cause of some player revolt and disruption around the table.

In opposition to this, products that give you information about an area within the world – a town, the NPCs, the history of the area, plot hooks, etc – shows you what is possible.

This is in stark contrast with the adventure telling you what happens.

And this is an important difference.

I would much rather be shown what is possible, than told what you need to do.

Maybe that’s just me (although let me know if it is you in the comments below).

Many would say however, that adventures offer structure, especially to new GMs.

I am not sure I entirely agree with this.

What it offers is a very set way of doing something.

And I don’t think this only applies to badly written adventures.

Good adventures suffer from the same issues: telling you what happens.

And as far as new GMs go, I think we need to be teaching them (showing them) how to get creative and run campaign worlds (even in one-shots) that are living and breathing and therefore realistic.

Give new GMs (any GMs) the tools and knowhow and you will have a good GM.

Give new GMs linear adventures and that’s all they will be able to run as that is all they think Dungeons and Dragons is – a set of steps to the ultimate goal.

The other issue with adventures is they end.

You get to the end and confront the “now what?” issue.

Ending an adventure is the easy part. What happens after that is an issue for a lot of (new) GMs.

That last one sounds messy. And more work than perhaps in needed.

And, if a campaign, is just a series of adventures stitched together, like some sort of Frankenstein’s monster, does that make a good experience?

I do wonder if most campaigns falling apart before level 10 (or roughly 6 months of weekly play) has something to do with the issues outlined here.

Another issue is they also only detail a very specific set of places. The cave where the PCs needs to get X and then the tower where they need to do Y.

I remember a new GM said to me once that he was always worried his players would wander outside the boundaries of the adventure he was running as the adventure gave no indication of what the “outside world” was like.

The adventure just told him what he needed to know about that adventure. Nothing more.

Giving the (new) GM the information they need to run that part of the world would have been a huge help.

That is, a product that provides information of the local area as well as plots and seeds for the GM to flex their creative muscles to come up with an adventure that fits better into their campaign world.

And more than a simple paragraph at the end.

A lot of pre-written adventures require the GM to jam them into the campaign world.

Maybe because it was a “cool adventure” (probably more of a cool idea), or it is what all the cool kids are playing, or it’s just the latest.

Running an adventure for those reasons make it more likely to not fit with the current characters, mood of the campaign, or the world in general.

You can make them fit, sure, but that takes work.

Time and energy that could be spent on creating part of your world instead.

I am a HUGE believer in knowing your campaign world.

Because you can “wing it” much easier.

I will never forget a session I was running (back when I ran 5e) that I had to completely make up on the spot because one of the NPCs was sucked into a portal to the Shadow Realm. One player was so attached she jumped in after him.

Then the other players followed her.

I wasn’t expecting that.

So, now the PCs were in the Shadow Plane (instead of the forest) and I had to make something up.

But I knew my world.

And how it worked. On some level, anyway.

I knew the Shadow Realm was a shadowy mirror image of the main world and so I played off that. The forest was there but it was a dead, shadow version.

The PCs were off to find, and bargain with, a Green Dragon (long story) and they were headed to some ruins in the heart of the forest where they believed the dragon’s lair was.

They were travelling in the Shadow Realm now and so they got there quicker (time is odd in the Shadown Plane) and found a ruin, but it was occupied by a Shadow Dragon (of course) as it was a shadowy reflection of the world.

They now had to bargain with a Shadow Dragon (who wanted the Green Dragon dead so it could rule both realms).

I did all this at the total surprise and delight of the players.

And how did I manage it: I knew my world.

So many adventures are available and so much work goes into them, I do wonder if creative juices are better spent elsewhere.

Are we too attached to the adventure format we had growing up (players and developers alike) that they are now the the standard?

A standard that shouldn’t be.

An alternative would be a product that provides information to the GM that enriches the world. A non-exhaustive list would include:

This way a GM can use that information to empower the PCs to choose what they want to do.

It also allows GMs to not be hamstrung by the guide rails and to instead come up with what will fit into their campaign at the time. No forcing needed.

And it will show the GM what is possible, and not tell them what to do.

What do you think? Are adventures something we should leave in the past?