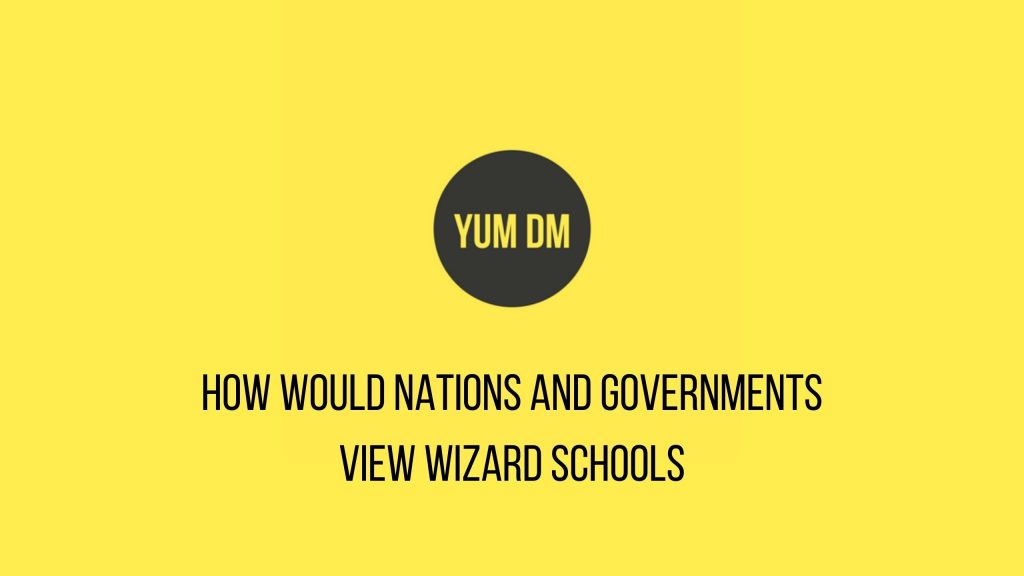 In this post we will explore the Wizard class and how the various spell schools could impact your campaign world.

The wizard uses a number of spell schools and specialist wizards (or those in 5e) use certain schools more than others.

With this in mind I got to thinking about how each spell school (and therefore wizard) would be perceived in the wider campaign world.

You can easily see how the Abjuration school could be very useful for a city-state or nation for defence, but as for Necromancy or even Divination, those could be seen as evil or dangerous.

We will look at each magic school and see how each one could be viewed.

Firstly, let’s list out the schools  of magic and then explore in more depth how these could impact your campaign world. There is also an example nation at the end.

The School of Abjuration emphasizes magic that blocks, banishes, or protects.

As I mentioned before I can definitely see how abjuration magic would be both useful and encouraged by a city-state or nation. It’s all about protection and this is something rulers of those nations would be interested in.

As a conjurer, you favor spells that produce objects and creatures out of thin air.

Conjuration is a mixed bag.

On the one hand you have some pretty benign and useful spells, but on the other, you have the ability to summon demons and other powerful foes. Those in power would be (and should be) looking at controlling what conjurers actually conjure.

As a diviner, you strive to part the veils of space, time, and consciousness so that you can see clearly.

This school would be a popular one for those in charge. And a well-coveted one as well. You could imagine a ruler wanting to know what was going to happen while restricting others access to that same knowledge.

As a member of the School of Enchantment, you have honed your ability to magically entrance and beguile other people and monsters.

I see this school being closely watched at the very least and possibly banned outright.

The reason being that a high level wizard could potentially kill the ruler or political opponent with a simple word!

And even lower level mages could alter the perceptions and decisions of a target.

This is one of those schools the war department would be very keen on. Leaders would want to fund this school and expect that its wizards would help defend the nation if attacked, and even be a part of their standing army.

You focus your studies on magic that dazzles the senses, befuddles the mind, and tricks even the wisest folk.

This is one of those schools that would frighten most rulers. Being able to trick and confuse those in charge would be a great threat indeed.

I could easily see this school being an underground one, similar to that of a Thieves’ Guild.

The School of Necromancy explores the cosmic forces of life, death, and undeath.

This is definitely one that would be banned in most good-aligned nations.

I know you could argue Necromancers don’t have to be evil, but just looking at the class as it stands in the PHB it would be a difficult argument to make.

The class absorbs hit points if it kills an opponent – that’s pretty evil if you really think about it.

That, and you get really good at creating undead at sixth level – something that would be abhorrent to most good-aligned civilisations.

You are a student of spells that modify energy and matter. To you, the world is not a fixed thing, but eminently mutable, and you delight in being an agent of change.

This is another one, like conjuration, that nations would be keeping a close eye on as it could be used for or against it.

Applying This in Your World

Magic can be – especially at higher levels – very frightening and dangerous for nations and their rulers.

It only takes one rogue wizard to level several towns and villages (maybe even cities) and it would take a lot to stop them.

Which is why rulers and governments would keep their own spell-casters on the payroll and/or partner with organisations that were capable of dealing with issues such as these.

But rulers and governments could also regulate certain schools of magic – preventing an issue before it becomes one.

Evocation schools, for example, could be tightly regulated and even brought into the military complex.

In Forgotten Realms there is a really good example of this in Cormyr (in D&D 2nd edition) – there are three types of wizards in Cormyr: the government-sanctioned War Wizards, the Registered (all wizard of 5th level or higher must register with the government), and the Renegades (those who choose not to register).

This brings into play all sorts of roleplaying opportunities, character development (which will the Cormyrian wizard PC choose to align himself with?), and potential story hooks for the GM to use.

Schools such as Illusion could be seen as dangerous.

Wizards with the ability to dazzles the senses, befuddles the mind, or even enter dreams could be seen as too dangerous to be allowed.

In one of the cities in my campaign, the illusion school was driven underground and ended up  partnering with the thieves’ guild – causing much mayhem for the authorities!

In cities with loose morals or a corrupt government, on the other hand, you could see a school such as Illusion, or even Necromancy, flourish.

You may even have a city of undead where Necromancy is the most dominate school.

Schools such as Divination could also cause trouble for governments. Or be too tempting for leaders to use to see what enemies are up to or to see what the future holds for them and their nation.

High level diviners could be hunted down or government-funded. Or both!

Secret societies and organisations could develop that are for or against certain wizard schools.

A secret society of wizards and sages who believe in knowledge about all else could harbour diviners who are illegal in a certain nations.

And where do the PCs fit into all of this?

Defining how each school is viewed by a nation can increase the drama and roleplaying possibilities for both PCs and GM.

Now that we have looked at each of the schools it’s time to decide how a nation may view each of them.

I have chosen one of the nations I have created for my sandbox world, Aythia – Ebron.

Ebron is a militaristic nation who has been at almost constant war with either itself or outside forces since it’s creation.

Let’s see how they could view each school of wizardry.

Remember, this is just an example and should be used to spur on your own ideas.

These two schools would be seen as essential and would be well-funded. There would be rival schools in various principalities.

The school of evocation would be part of the military or closely associated with it and the wizards would be trained in war and military tactics.

This is where the classic War Wizards would come from.

There could also be some wizards who combine their magic with weapons to create some new fighting styles.

These schools would be tightly controlled by the government. They can be used to great affect, but could also cause great damage if left unchecked.

The Necromancy school has been banned outright – only the priests have control over death. A few secret school nevertheless exist, but they do so as small cabals of wizards who wish to learn more about undeath and to remain hidden from public view.

These schools all exist in Ebron, but they are either under-funded (such as the illusion school) or tightly regulated (like enchantment and divination). The people of Ebron are also very practical and so the schools like illusion and divination don’t hold much interest, especially when compared to the more prestigious schools of evocation and abjuration.

Uptake of these schools is limited also – why would you join a school that is underfunded when you can have greater stature by joining a more prestigious school?

Each nation and race in your campaign world may view various wizard schools differently. This could lead to conflict and roleplaying opportunities.

This is also a great way to add diversity to your world and to give wizard characters an additional roleplaying opportunities.

How would the various wizard schools be viewed in your world?