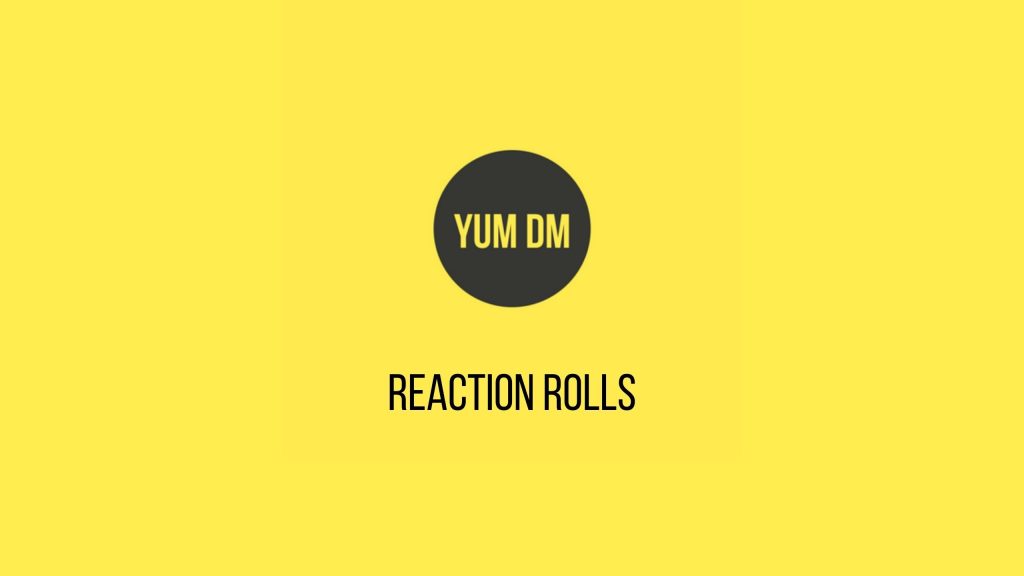 Reaction rolls are an old school mechanic in D&D that allows you to determine how an NPC or monster will react to the PCs.

This mostly forgotten mechanic (at least in the modern game) was a core rule in earlier versions of the game (OSR).

When the party came upon a random encounter with intelligent monsters, and the party decided to parley with them instead of attacking them, the GM would then roll a reaction check for the monsters.

This is instead of making an arbitrary decision.

This is a great system that allows for random results to pop up. Even ones the GM didn’t expect.

I think this is why they are not used all that often in the modern game – it means the GM needs to wing it.

Why are the orcs communicating with the party instead of killing them? Why did the wizard get angry and attack the PCs? Was it something they said?

It means coming up with a reason why the dice rolled the way they did – why was the monster friendly? or why did the NPC suddenly attack the party?

And this can be difficult to do on the fly for some GMs.

Reaction roll charts come in many different sizes, from a simple 2D6 roll to percentile roll, to a little more complex.

I usually love simple, but in this case I use a slightly more complex one. The one from the 1983 Mentzer Basic Set: 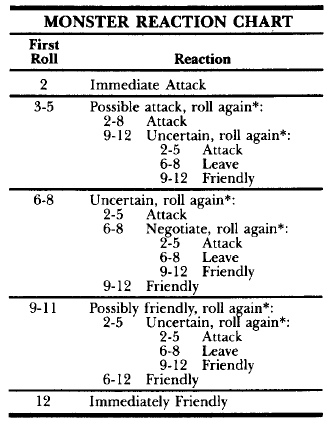 Why do I like this chart over the others?

This allows for multiple rolls as the conversation progresses.

The initial roll is made after the PCs make “first contact” and decide to talk.

On the chart, this is listed under the “First Roll”.

As the parley progresses, the GM can roll again based on the first roll.

See below on how to alter the chart.

The PCs stumble across some goblins and they decide to talk to them instead of initiating combat.

The PCs shout out in the goblin tongue that they could kill them all, but will spare them if the goblins give them some information about the caverns they are exploring.

The GM rolls a reaction check and determines the goblin’s reaction to the PCs based on the roll.

Say the roll was 10. On the above chart we can see the result is “possibly friendly”. In this instance, I would rule the goblins are suspicious but willing to negotiate.

The goblins bark something back to the PCs along the lines of what information they seek and the PCs at this point want a map of the tunnels they are now searching.

The GM knows these goblins are not native to the caverns and are searching them as well as the PCs, but they have been here longer than the PCs and may have mapped out some of the tunnels.

The GM uses the D6 Mechanic to decide: 1-3 on a D6 and the goblins have a crude map of the tunnels they have already explored.

He rolls a 1 and so the goblins do have a decent map they could share with the PCs – for sparing their lives.

The GM then rolls on the reaction table again, getting an eight this time.

This indicates “friendly” (remember, we are looking at the second part of the table, under “Possibly Friendly”).

If he had rolled 5 or less, the goblins would have still been uncertain and negotiations would have to continue.

You can modify the check various ways, including:

Modify the roll with the charisma modifier of the PC who is doing most of the negotiations. Be careful though as too high a bonus and it will skew the results too much. This would be more suited to the OSR-style of abilities that usually range to a maximum of +/- 3.

If the goblins in the example above are chaotic evil and the lead PC is lawful good, you could impose a penalty of -1 of -2.

There can always be some circumstances where you need to impose a penalty or bonus. If one of the PCs is a noble, the king may be more disposed to listening to them. Or, if the PCs had already killed a patrol of goblins, then the others may be less disposed towards the PCs.

This is also a great mechanic for those of you who soloRPG.

You can use this system to see how NPCs and monsters will react to your characters without needing a GM to decide.

Above, I showed you the chart I use for reaction rolls, but it can be updated to suit most situations, just by changing a few words.

So, if you roll 2 (or less) an ‘immediate attack’ becomes ‘negative result’, which could mean the NPCs or monsters attack or it could mean your negotiations fail, or that the NPC leaves in a huff.

Basically, you want an outcome that is related to the NPC or monster.

If the NPC is an overweight trader, he isn’t likely to attack the PCs, but he may just storm off in a huff and hold a grudge – not trading with the PCs in the future. He may even go to his guild and get the PCs banned from commerce in the city he is in.

As you can see, the chart is versatile and can be changed to suit most situations.

What is your opinion of reaction rolls? Do you use them?