Let the simple D6 Mechanic decide for you.

This simple mechanic will allow you to add in some randomness to your Dungeons and Dragons sessions.

Instead of making decisions all the time, let the die decide for you.

All you have to do is decide on the odds.

A simple mechanic like the D6 Mechanic can be used at the table within seconds.

Let’s look at an example.

Say the PCs barge into the king’s chamber with some important news the captain of the guard has been keeping from the king.

Now, this is a king, will he even bother to see the PCs? He is a very important man and these are just commoners after all.

There are no rules for this.

Yes, you could use a reaction roll, but the PCs haven’t even spoken to the king yet, apart from shouting out his name like a rabble and trying to get past his royal guardsmen.

Instead of deciding arbitrarily, you use the D6 Mechanic.

Giving the king’s status and the status of the PCs, you give the odds of just 2 in 6 chance of the PCs convincing the king to listen to them.

So, on a roll of 1 or 2 on a D6, the king will agree to hear them out. (And that’s when you can roll reaction based on what the PCs say and do next).

You roll the dice and get a 3, the king pauses for a moment and then wanders off, telling his royal guard to throw out the rabble.

Oh, my. The captain of the guard smiles behind his bushy beard.

You can also add extra results.

In the example above, you could have said that on a roll of 6, the king would have the PCs thrown in jail instead of merely expelling them.

And you can use this in all sorts of situation that rules don’t cover.

Anytime you think to yourself questions like “what would they do?” or “what state is that item in?” you can use the D6 Mechanic.

You can also base the odds on the situation and people.

In the example above, using the MAP method (you can find this method in Issue 0 of my zine, d12 Monthly), where you list an NPCs main traits – Motivation, Appearance, Personality – if the king’s persnality was impatient or shy, then you could have given just a 1 in 6 chance of success.

If his personality was gracious or welcoming, you could have bumped it up to a 3 in 6 chance.

The D6 Mecanic can also be a boon for soloRPG play as you are leaving decisions normally made for the GM, up to the die.

The characters come across a chasm in the dungeon, and they spot an old rusted chain dangling from the ceiling halfway they could use to swing across.

In what condition is the chain in?

You quickly decide that on a roll of a 1 or 2, it is so old it snaps if a character tries to use it.

You could also easy and quickly alter this for small (and presumably light) characters – ruling it only breaks on a 1 in 6 for them.

A third example could be if the rogue or thief in the party wants to sneak past the guard post.

Is the guard attentive?

The D6 Mechanic can be used many different times throughout each D&D session and campaign.

Notes on the D6 Mechanic

A couple of notes to keep in mind.

Caldwell41 over on Twitter mentioned that he uses a neat little system based on this one. 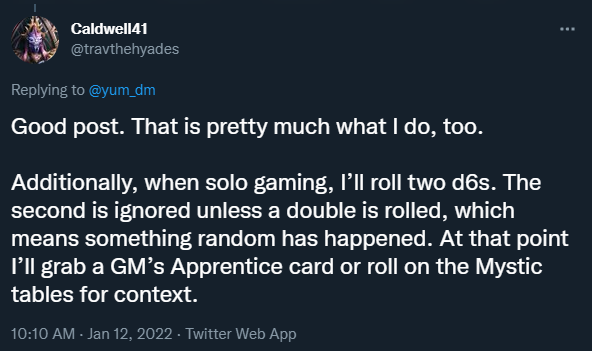 So, he uses 2D6, but the second D6 only comes into effect if doubles are rolled. If this happens, he then consults a table to find out what odd thing happens.

I really like this system as it throws in an element of complete randomness to a situation and allows you to stretch your creativity.

Is this something you would want to use in your D&D campaign?