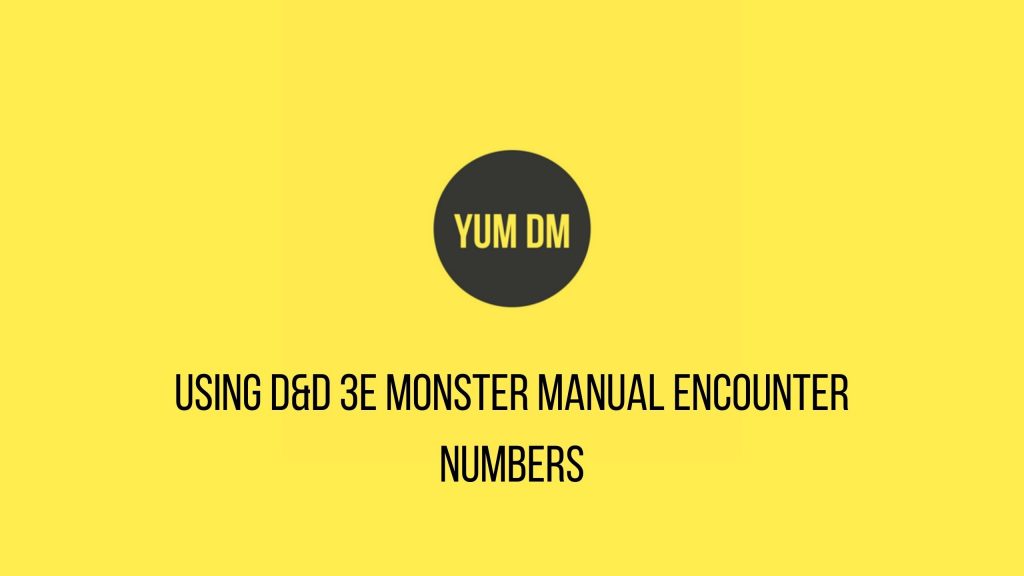 One of the great things about the Dungeons And Dragons 3rd edition Monster Manual is the additional information they give you regarding monsters.

This includes the climate and terrain the monsters are found in, and their organisation (numbers appearing).

Instead of using one number for number appearing like in earlier editions, 3e provides varying groups based on the creature.

While Medusas appear solidary or in a covey (2-4).

Why Use Encounter Numbers?

This not only gives you variety when making up your random encounter tables, but it provides some great inspiration as well.

For more on random encounters, see my article on what the monsters are doing and Issue 7 of my D&D zine (page 16) where I discuss random enounters and show you how to build your own.

You can integrate these varying encounter numbers into your encounter tables.

Encounter tables always have number of creatures appearing and while most of these are level-appropriate, they don’t need to be.

If the party runs into a group of orc, the encounter could be very different if they run into a gang or a band!

The first one, the PCs could easily dispatch, while the second, the PCs are more likely to try and hide or run and can then decide how (if at all) they tackle 30-100 orcs!

The GM can also have fun coming up with reasons why so many orcs are on the move.

Maybe it’s an army marching on a town (will the PCs warn the town? And can they get there before the orc army?), or a displaced village of orcs who are looking for a new place to settle (this could allow some interesting roleplay moments).

This means your world will feel much more real to the players and will add some more excitement into the game, rather than just killing level-appropriate monsters.

How to Use Encounter Numbers

You can use these varying encounter numbers to make your encounter tables much more realistic and dynamic.

When a certain creature is rolled on a random encounter table, you can quickly roll a simple D6 to determine their numbers.

Let’s look at the two examples from above.

With the orcs, the table could look like this:

While the Medusa would be:

You could also change this depending on climate or location in general.

If you are in a known orc-infested area of your campaign world, you could alter the table to favour the squad or band as these would be more likely.

If, on the other hand, the PCs are exploring some ancient ruins, a covey of medusas would be more likely than represented in the table above. Maybe 1-3 on a D6.

On the other hand, the PCs are more likely to encounter Pseudodragons in temperate or warm forests, so it makes sense their numbers may be greater in these areas (a clutch of 3-5).

You could create these tables beforehand, when creating the encounter table, or simply decide at the time – “winging it”.

D6 tables are quite easy to create and won’t take much time at all – whether you do it beforehand or at the table.

Or, you could use the D6 Mechanic to decide based on various odds.

How would you use these encounter groupings?