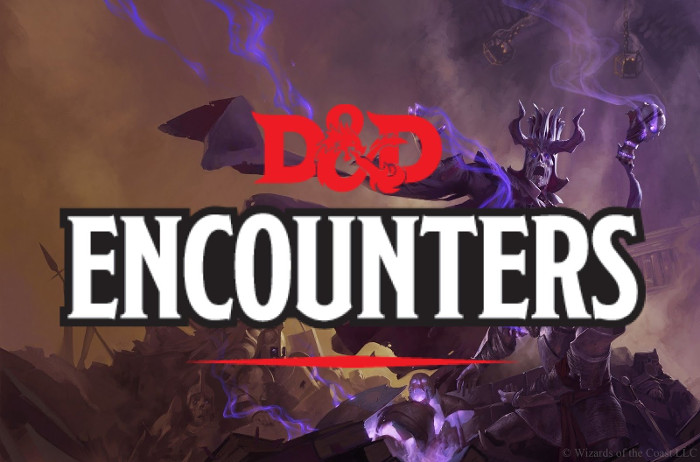 One thing that makes a lot of the great D&D world, like Forgotten Realms, so good is they a steeped in history.

And this history comes to life to such an extent that it impacts on current events.

This is something I have always liked and something I wanted to add to my new sandbox campaign world.

However, it can be difficult to come up with so much vivid history for your own world. Or you may be too worried about what is happening now to give it much thought.

But creating rich and believable history to the locations in your world can add so much, and gives a character who has the History or Investigation skill the chance of using them in a meaningful way.

How to Add History Quickly

So, how can you add some history quickly to your game world?

Simply by rolling on some random encounter tables.

Random encounter tables are great for just that – rolling random encounters – but I also find them useful for coming up with a quick (and random) history to a particular location in my campaign world.

In my current campaign in the world of Aythia the PCs started their adventuring careers in a town called Hillstone.

I managed to flesh out Hillstone just enough for them to give the PCs a place to start which had some life to it.

Firstly, it gets it’s name from the dozen or so standing stones that are located near the centre of town.

It started as a small village which was built on a small hill in the middle of these stones. These stones were arranged in a circle and were used to help defend the village early on.

Once the village started to grow it’s buildings encroached on the grasslands around it and farms were created to the north and south of the town.

Eventually, after some orc raids, the townsfolk built a stone wall around the town and the old wooden walls between the standing stones is now mostly gone (used for firewood or to build homes) or is in a state of disrepair.

This is about all I wrote up for the town before we started the campaign (apart from fleshing out some NPCs).

But now they are playing in and around the town I thought it would a good idea to give it a backstory – especially before one of the players asks why the stones are there and what they were used for.

I came up with the idea of using random encounter tables while reading an article on north Faerun and gave it a try on the history of Hillstone.

Here is what the random rolls came up with.

Before I jump into this I want to note I did re-roll some results as they didn’t make sense, so feel free to do the same.

Also, I decided to go backwards in time with this history, starting with the most recent history and going further back.

Again, you don’t have to do it this way, but it worked for me this time.

Finally, I rolled on various tables using various levels to give a nice variety of results.

You can roll as many times as you like, but with my imagination bursting with ideas I decided to get writing and fill in the details.

Here is what I came up with:

The village of Hillstone was founded on 1092 NR (Norther Reckoning) on the ruins of an old tower and in the centre of the standing stones.

This offered the village protection from external forces and placed it on higher ground.

Before the village was built on Hillstone hill, there was a tower which was home to a Knightly Order call the Order of Four, which itself was founded in 1065 NR. The stone foundations can still be seen if looked for near the very centre of the standing stones.

The tower was destroyed after a party of adventurers fought with and destroyed a Death Knight who was the tower’s single resident.

The Death Knight was the last remaining member of the Order of Four and was turned into the vile undead after killing his fellow knights as they slept after he grew jealous of them. He failed to atone and was driven insane by his actions, and eventually killed himself, only to rise as a Death Knight.

The adventurers managed to learn of the story of the Order of Four (one of the adventurers was a descendant of the murdered knights) and finally destroyed the knight and put him to rest so he wouldn’t rise again.

After the Death Knight was destroyed the tower was brought down and the stones carted away to be used in a nearby town. Only the foundations remained.

There is a longer history to Hillstone than this.

-50 NR
The standing stones were laid by the followers of the (now) dead God of Magic over 1100 years ago, who constructed many of these nodes across the Known World in an attempt to strengthen the gods powers. It worked for a time, but once the god perished (at the hands of a few of the other gods) the magic in the nodes diminished and were eventually forgotten about.

Many of these nodes simply stopped working, while a few became areas of wild magic.

After the construction of the Hillstone node, the god knew it would need protecting so he placed a number of Couatls there, who stayed underground, to protect the node.

After the god’s death, the Couatls stayed on but eventually they too passed on and only a single one remained. Seeing it’s death coming, it mated with another Couatl and had a single egg, which it placed into a dormant state – this still rests under the hill, untouched and forgotten.

403 NR
With magic having returned and having become stable once more, those who were interested in the now old ways of practicing magic went to great length to find ancient tomes and other pieces of information.

Illukan the Wise was one such individual who, after studying up on the dead god, discovered information about the nodes. He passed this information on to a friend – a dwarven runecaster by the name of Dorthund Runehand – who became obsessed with the nodes.

Dorthund traveled to all the known nodes, finally coming to the one at Hillstone. His obsession with earth magic drove him to tap into the ancient power laying dormant in the stones, turning them into Stone Golems.

He underestimated their power and they turned on him, killing him and then rampaging through the Freelands destroying everything in their path. They were eventually stopped by various parties, but not before two of them turned one of the city-states to ruins.

That’s as far as I got with my history of Hillstone, but it was enough to answer any questions a PC may have or to understand my world a little better.

You can obviously go further with this as well – who was Illukan the Wise? Who was Dorthund Runehand? Were they evil or just too obsessed? Does the magic to animate the remaining stones still exist?

All of the answers to these questions can lead to even more adventure.

Not Much to It

As you can see you can develop a rich a colourful history of your locations simply by rolling a few dice.

So, over to you – what histories can you create with random encounter tables?