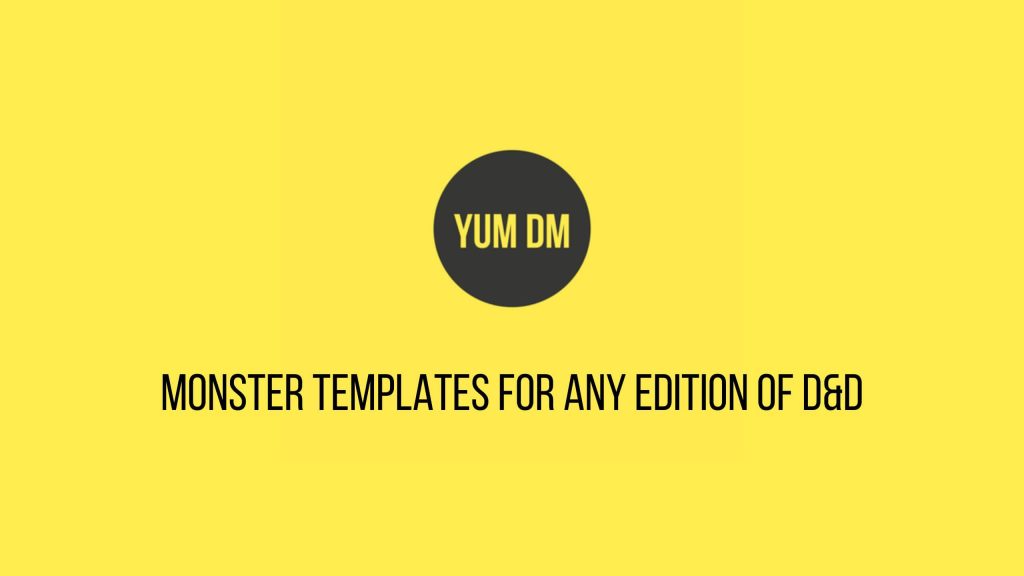 The third edition of Dungeons and Dragons (3e) introduced a great arrow in the quiver of any GM’s bow: the monster template.

This article will help you understand what monster templates are and how you can apply them to any edition of D&D that you play.

Monster templates are simply a package of additional abilities and traits you can add to any (or just a select few) monster types, which will change the original monster in some way.

This change could be fundamental or more subtle, but it does give benefits (and sometimes disadvantages) to the “base” creature.

Templates augment a monster’s base attributes. It can increase their armour class, hit dice, movement, give them additional attacks or varying damage, increase (or decrease) their main abilities, and much more.

Why Use Monster Templates?

Why use a lion when a dire lion could be introduced?

Why have a giant, when a ghost giant would be cooler?

Templates can do a few things: 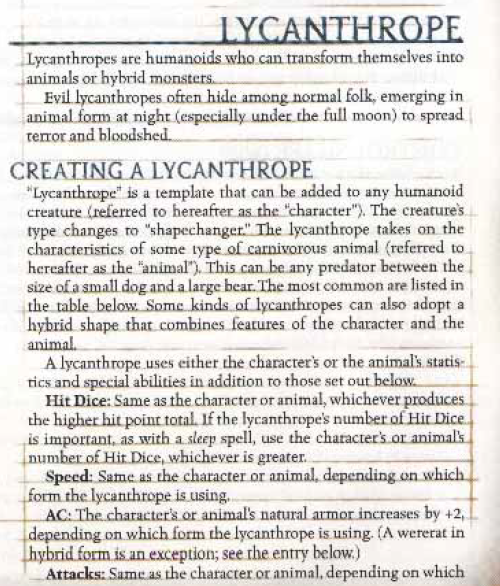 The lycanthrope template pictured above is a good example of a monster template.

It can turn any humanoid monster into a were-creature.

Instead of just having a ho-hum human werewolf, you can create any humanoid and give them lycanthropy by adding the template.

How about a halfling were-boar, or an Ogre were-lion. Now things are getting interesting!

Adding Templates to Any Edition

You can add a template you have tweaked or created easily to any edition of D&D. I have created templates for 3rd edition and also BX/OSE.

The nature of Dungeons & Dragons’ basic rules is that most templates can be easily adapted from one edition to another.

Let’s take the Broken Soul template from Pathfinder and tweak it for Old School Essentials.

A Broken Soul is “torment and pain made manifest,” with the following traits:

As you can see, it’s very quick and easy to tweak a template for use for any edition of D&D.

Below are two additional templates that I have created for my Old School Essentials campaign: Dire and Vampire. I have used the 3rd edition templates as a base and tweaked as needed.

As you can see below, you can make templates as simple or as detailed as needed.

Dire creatures are larger and more aggressive than their regular counterparts. This template may be applied to any animal or beast.

Vampiric monsters need to drain blood from victims to sustain themselves. They also have a number of weaknesses as well as traits. This template may be applied to any humanoid or monstrous humanoid creature.

Dominate: As a standard action you gaze at an opponent and dominate them as per the spell. They receive a Will/Wisdom save to negate.
Energy Drain: living creatures struck by the vampire’s slam attack suffer -2 levels.

Blood Drain: Upon a successful grapple attack, the vampire may suck blood from a victim, causing D4 points of permanent Constitution drain each round.

Children of the Night: vampires can control and call forth one of the following per night: pack of 4D8 dire rats, a swarm of 10D10 bats, or 3D6 wolves. They appear in 2D6 rounds and serve the vampire for 1 hour.

Create Vampire Spawn: a humanoid or monstrous humanoid slain by a vampire becomes a vampire spawn D4 days after burial.

Damage Resistance: Can only be hurt by magical attacks.

Gaseous Form: when a vampire reaches 0 HP, they turn gaseous and return to their lair.

Alternate Form: a vampire can assume the shape of the following for one hour: rat, bat, or wolf.

Making your own templates is as easy as using an existing one as a base or creating one from scratch.

While the latter is a little more work, it can prove to be much better for world building and adding uniqueness to your campaign world.

There are also plenty of online resources you can use to get inspiration, as listed below.

Realmshelp.com has a large list of monster templates found in the Forgotten Realms – ready to use as is or adapt.

The Pathfinder SRD also has a list of monster templates ready to use.

ENWorld.org has a great post which lists all the monster templates found in various 3rd edition products.

And another list of Monster Templates in official products exists on MinMaxForum.com

Do you use monster templates? Let me know in the comments below.

2 Replies to “Monster Templates For Any Edition of D&D”