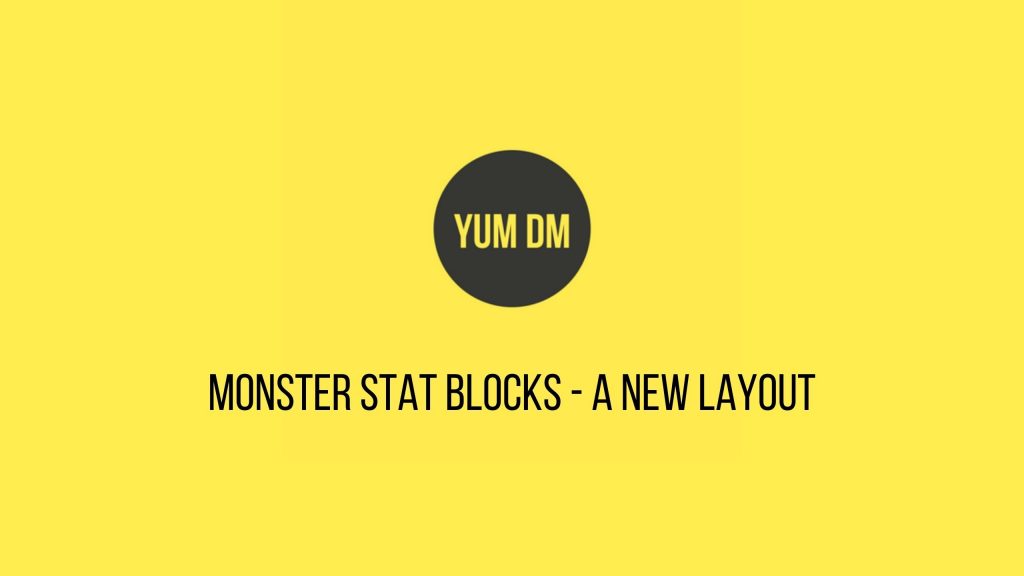 Monster stat blocks are an essential part of the Dungeons & Dragons game.

They let the GM know a lot about the monster – at least they should.

What they tend to end up like is a combat block, rather than a monster stat block, focusing on combat-orientated information.

Helpful in combat, but not very complete, given the characters may want to parley or interact with the creature in other ways.

What I have developed is a modular monster stat block that will give GMs the information they need – at a glance – to run the monster in any situation.

What follows is the template I use.

As you can see, the block is divided into three “modules”.

Non-combat information is listed first to give the GM the ability to see where the monster would appear and whether they would be active.

This information is especially important for building random encounter tables for your campaign world, allowing you see where a creature would be.

If you want to know how to create and use random encounter tables, check out Issue 7 of my free D&D zine.

The second module gives the GM information about the creature’s abilities, skills, and feats (if appropriate).

And finally, the last module focuses on combat. Giving the GM the information he needs to run the creature if a fight breaks out.

Size & Type – What size the creature is and what type (based on the types listed in the monster manual.
Climate/Terrain – What climate and what terrain the creature is usually found in.
Frequency – How often the creature is found: very rare, rare, uncommon, or common. Use these to fill out your encounter tables.
Organisation – What numbers the creatures appear. This can help you understand how many creatures appear on your encounter tables.
Activity Cycle – Whether they are more active during the day or at night, or both.
Alignment – What alignment they tend to be.
Treasure – What treasure they sually have with them or in their lair.
Advancement – How they advance – either by size/HD or by class.
Languages – What languages they speak.

Change What You Need

Of course you could change, delete, or add to the actual entries to suit the edition you play, but the idea remains the same: to focus on more than just combat within your monster stat blocks.

What do you think, would you use something like this?