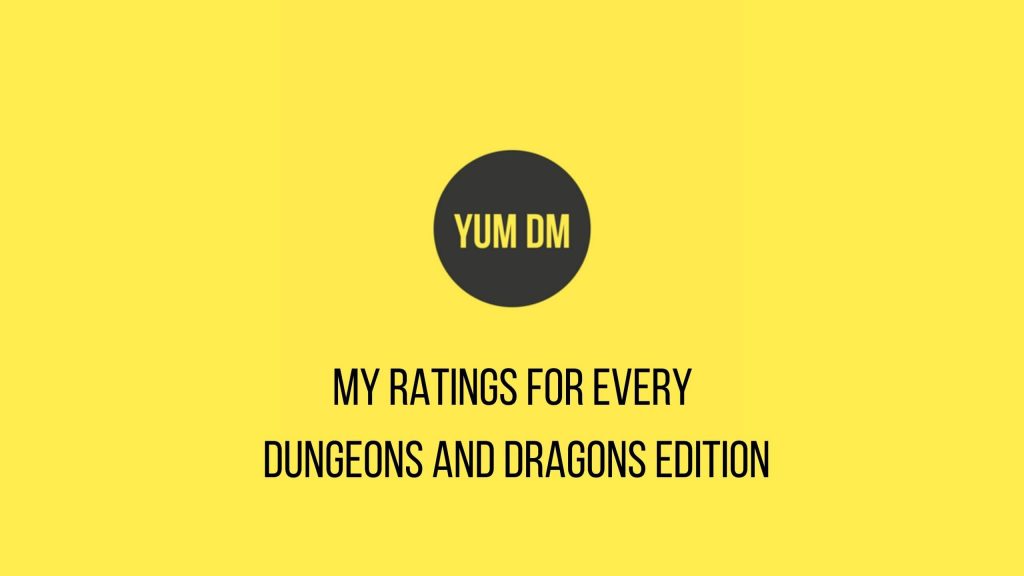 I thought it would be fun to rate each edition of D&D.

This is completely down to personal taste and you are free to agree or disagree (feel free to do so in the comments below).

I have also added in some strengths and weaknesses for each. As well as a short blurb.

I am also going to be honest and upfront and say I have not played every edition – some of the earlier editions I haven’t played as I started with AD&D and haven’t had a chance to go back and play them all. I have noted this where appropriate.

Strengths: Simple and straight forward. Easy to learn and to hack.

Weaknesses: Races as classes and maybe a little too simple.

Over All: A real breakthrough at the time, making D&D even more accessible and easy to play.

Strengths: Easy to understand rules – a great way to get into D&D.

Weaknesses: Only went to 3rd level and probably too much focused on entry level (although that was its purpose).

Over All: A really cool way to start off with D&D. Two books – one for the player and one for the GM – is all you need to get started with the world’s longest running TTRPG.

Strengths: An intricate system that works well as a whole and, once mastered, provides everything you need.

Strengths: A workable system that is backward compatible with AD&D, with a slew of optional rules. More streamlined rules.

Weaknesses: Maybe too many options. Could lead to bloat and confusion.

Over All: AD&D 2nd edition was a breath of fresh air design-wise from AD&D. It laid out rules and new options side-by-side which were easy to understand.

Strengths: A slew of options where given in the expanded core books, but otherwise the same as 2nd edition above.

Weaknesses: An unnecessary reprint that had bad artwork and design that had nothing on what came before or after.

Over All: In the dying days of second edition, the re-release of the rules saw all the core books reprinted and a series of books that gave many optional rules to the already option-obsessed game.

Over All: Third-edition D&D delivers a beautiful set of rules with a focus on character creation and development. It’s rules work perfectly together under a unified D20 system. It is seen as a little crunchy as it seems to want to have a rule for everything, but what it makes up for in crunchiness it delivers as a solid mid-power level edition.

Strengths: A unified system that delivers a streamlined and effective game.

Over All: D&D 3.5 was released as a money-making exercise by Wizards of the Coast and moved D&D into a more combat-focused, mini-focused combat game. In the process, it lost some of the charm of 3rd edition.

Weaknesses: A game better suited to a skirmish war game than a roleplaying game. Too much of an obsession with creating builds that were perfectly balanced.

Over All: Fourth edition really leant into the war game roots of Dungeons and Dragons and as a result lost a lot of the roleplaying focus that earlier editions maintained.

Weaknesses: Broken skills system, a focus on high fantasy/high magic, and a system that traded away flavour for simplicity.

Over All: D&D 5e was the great hope for Wizards of the Coast. Having been surpassed in sales and fans by Paizo’s Pathfinder, they needed a way back into the market. By focusing on the core of what Dungeons and Dragons was, they managed to create a game that was easily playable (from a modern gaming standpoint) and digestible by old and new fans alike.

Unfortunately, they have more recently moved in a new direction, ignoring older fans completely for a new target market and has produced an even more vanilla TTRP than previously.

4 Replies to “My Ratings For Every Dungeons And Dragons Edition”