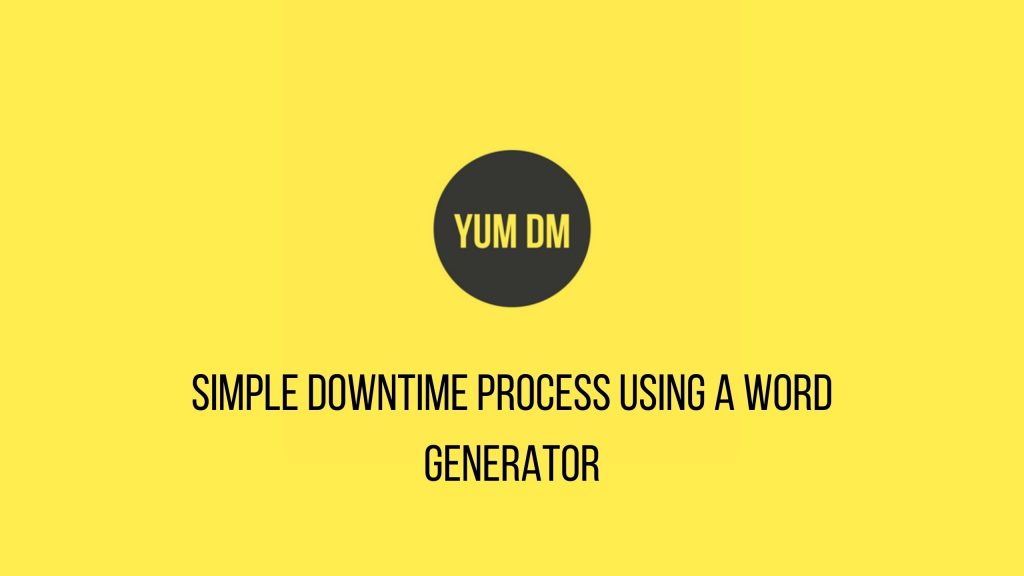 With the thoughts of my easy word generator still ringing in my head, I thought I would put it to some use other than what I laid out in that blog post.

This time, I will use it to create a simple, yet useful, system you could use for any downtime you have between adventures.

In fact, you could easily generate mini-adventures using this system, as you will see.

This is a simple and quick process to create interesting things that happen to characters during their downtime. It simulates events that occur around them during their endeavours.

As you will see it can create some new rules for the character, come up with new NPCs, and even mini-adventures.

The first thing you need to do is to understand what each of the characters want to do that week.

This can be used in line with the downtime rules present in the 5e DMG or the PCs can come up with their own tasks.

For example, say we have a party of four characters: a fighter, a mage, a cleric, and a rogue. Apart from their normal adventuring duties, for their downtime, each wants to do something for themselves:

Downtime lasts for two weeks so we get to roll on the table twice.

The first roll comes up a 3: Something minor happens to a random character to stymie them in some way.

Now we want to see which PC this affects. Rolling a d4 we get a 2: the mage.

We then roll three times on table 2 and get: earthy, earn, and proposal.

Now we can weave one or more of these words into a situation, keeping in mind the initial roll: something is hampering the mage from completing his goal.

The mage wants to scribe a new spell into his spellbook, but something is hampering his progress.

The druid agrees, but decides the mage must earn it by helping him clean out a cabal of cultists nearby.

You suddenly have a solo adventure for your mage (with you running the Druid) or, alternatively, he could bring his adventuring friends along for the quest.

During the second week the GM rolls again.

This time we roll a 6 for table 1: Something wonderful or unexpected (in a good way) happens to a random character.

Next we roll for who it affects: the fighter.

And lastly, we roll on the word table three times: gaudy, earn, knowledge.

Now we need to put this together.

While practicing and trying to perfect her style, the fighter hits a roadblock.

Until, that is, a noble, who dresses in the most gaudy manner, learns of the fighter and notices her struggling. He has trained in the art of combat under one of the more senior weapon masters in a nearby city and offers to teach the fighter a few moves that may help (maybe in exchange for a date or a mini-adventure).

Because this is a positive result, the fighter learns a new feat or skill (or gains a simple bonus in a specific circumstance – maybe she gains +1 when fighting more than one enemy or +1 to damage when she makes Opportunity Attacks – that fits with her fighting style that she can use in future combats.

This knowledge will serve her well.

She has not only gained a new skill, but has also met and perhaps will maintain a connection with a new NPC.

You could roll for each of the PCs using this system, but I find rolling for just one at random makes the whole process quicker and easier.

Using the random word generator I have mentioned previously, you could change up the words every so often to keep it all fresh.

To make the process super quick, roll a D6 and D12 together and just read along the same line. This could be a quicker way to generate it at the gaming table.

Let me know in the comments below how you go using this system.