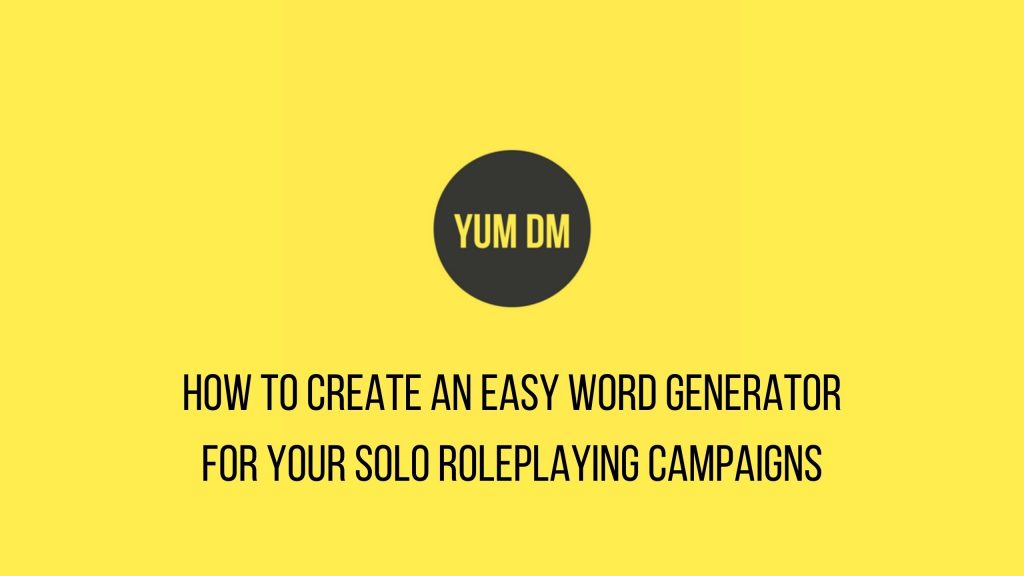 In my post of how I solo roleplay Dungeons and Dragons I talk about how I use a word generator by Paul Bimler in his The Solo Adventurer’s Toolbox.

It is a great tool to use when solo roleplaying (or SoloRPG) as you can use it a number of ways.

When to Use it?

I use it a great deal when I am faced with the question of why?

Why is the dragon there? Why do the dwarves want to resurrect their ancient general? Why are the elves revolting against their own leadership?

Any time these sort of questions come up during the session, I use Paul’s tables.

Well, that was until I came across a neat little site that generates random words for you.

The website is called simply enough, the Random Word Generator, and it does exactly what it says on the box: that is, generates random words.

These can be a mix of word types, or can be just verbs, nouns, or adjectives.

I created a simple spreadsheet within Google Docs and collected 100 of each type, as you can see below. 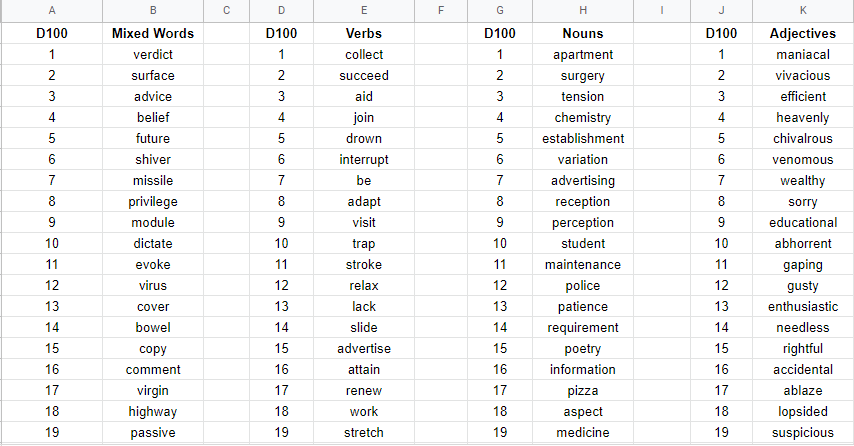 I also created a simple D100 randomizer within the spreadsheet, which gives me a random number between 1 and 100 and then I use that to find the four words I will use, one from each column.

An example would be if I generated (or rolled) the number 98.

This gives me the following words from the four tables I created (the first, mixed; the second, verb; the third, nouns; and the last, adjectives): candidate, provoke, chapter, and changeable.

From these words, I can generate a story.

To use an example from above: Why are the elves revolting against their own leadership? I could say the following.

The elves are having what humans would call an election of their leadership, but one of the candidates advocates too much change within the elven community. This is provoking the more traditional factions within the elven leadership into serious action, but this new candidate has a lot of popular support.

From here, I can create a background story that I can use while solo roleplaying.

A Couple of Tips

1. For a typical D&D camapign, you will need to cull some of the more modern word in your list, which I haven’t done yet – words like pizza and camera – which came up on my lists.

Obviously, for more modern games you could leave it as is.

2. You will need to run the word generator twice as it has a maximum of 50 words per use, but this is easy enough to do.

3. Also, if you are pendantic like me, you will want to find any duplicates and replace them – this is as simple as doing a word search or just manually looking through the lists.

Let me know how you get along and if you have generated your own tables.