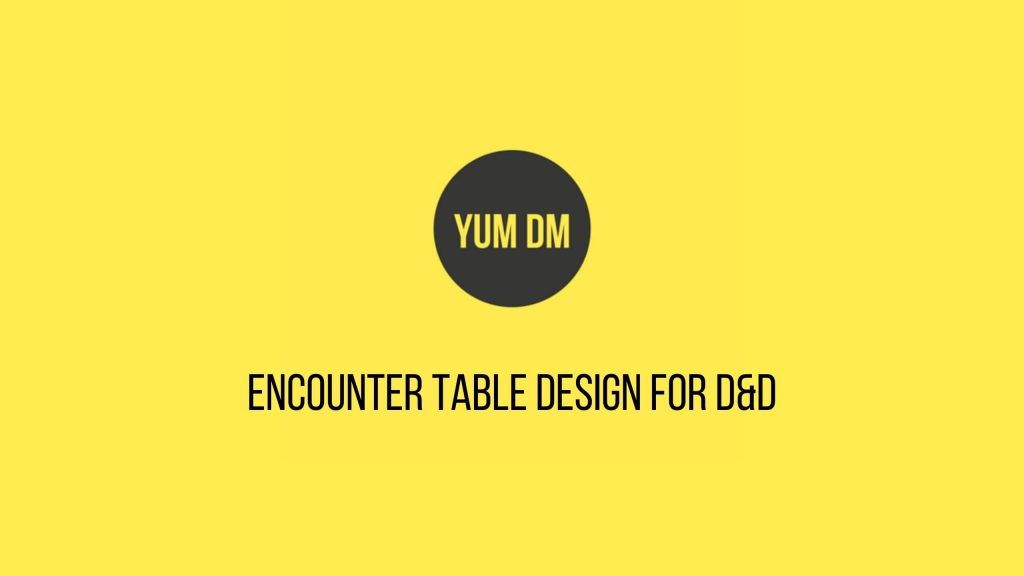 I have written about how good Dungeons & Dragons random encounter tables are before, both in this blog and in issue 7 of my zine.

In this post I want to respond in a way to a video I watched where the host was explaining how bell-curve random tables are not truly random and shouldn’t be used. A single die with a way to roll higher than the max would be better.

I both agree and disagree with this notion.

It all comes down to what you want to get out of the table and what area in your campaign world the table is for.

Let’s dive into it.

If you don’t understand (or haven’t really thought about) the odds when rolling dice in D&D, then I have explained this a little before.

But, simply put, using a single die when rolling gives you the same odds of any one number coming up. Rolling a nat 20 on a D20 is 5% – the same as rolling a 13. Or any other number.

When you roll two dice and add them together, you get what’s called a bell curve effect (you can see what I mean on this odds site).

As far as our random tables go, this means that some results are more likely than others when rolling two dice.

There is a big difference in odds between a single D20 and 2D10.

And this is a good thing as it gives you options.

Using both of these tables can give you more options and better random encounter tables, which will add verisimilitude to your campaign world.

I use both types of tables but in different areas of my campaign world.

Before I get into that however, there is a way you can single die tables to good effect if you are worried about keeping the encounters optimised for your party’s level (this isn’t really necessary but some GMs want to do this).

Simply create 11 encounters with the easiest (lowest CR) being in number 2 spot (there is no number 11 spot and you will see why in a minute), and then add increasingly higher CRs in the higher spots on the table, making sure spots 2-7 are tailored for their level and spots 8-11 are for higher level characters.

Here is a quick example for a low-level party.

You then simply roll a D6 and add the average party level to the result. For parties up to 6th level, this works well.

For example, a random encounter is called for and you roll a 3, adding 2 (the party’s level) to the result to get a 5. Later on, you roll a 6, adding 2, to get an 8 – a tough encounter but one the PCs could deal with if they play smart.

Back to where to use both types of tables.

Using Regions in your Campaign World

I tend to use the bell-curve type table in more civilised regions of my campaign world, or in areas where a particular monster dominates.

For example, the civilised areas around the city-state of Myrbridge is well patrolled and so patrols, travellers along the road, and merchant traffic would be encountered way more often than any monsters.

Having said that some monsters do sometimes hunt or use hit-and-run tactics in these areas (but leave before stiff resistance arrives), but these are rare.

An example encounter table around Myrbridge.

Similarly, in areas which are dominated by a particular type of monster or culture, I would use bell-curve tables.

In issue 7 of my d12 Monthly zine I showcase a random encounter table in a region where there are two major barbarian tribes. You can see the table below. 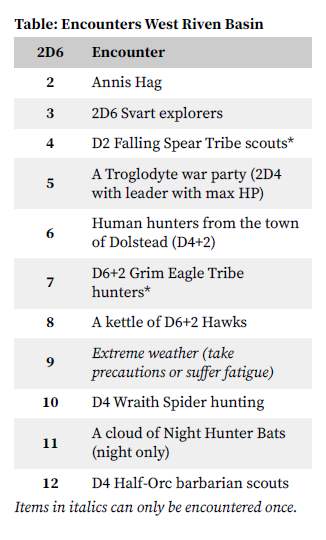 As you can see, spots 6-8 (the most often rolled) have locals in those spots: human hunters from a nearby town, barbarian tribesmen, and eagles (which are common in the area thanks to mountainous eyries and the barbarians breeding them).

Giving the Annis Hag the same odds of being encountered as some tribesmen is unrealistic.

In border or wild regions of my world, I tend to stick to the single die for encounter tables.

In the wilderness there can be many different dangers and each of these can have a more likely equal chance of being encountered.

This is where I would use the single D6 with 12 spots. But I wouldn’t use level to add to the result. I would use zones.

Each region or area of my world has an associated with a particular zone.

When I develop an area, I give it a zone number.

For example, the patrolled areas around a frontier stronghold might be zone 0, while a frontier region might be 2 or 3. Meanwhile, a true wilderness area would be 4 or 5. The area around Mt Doom would be zone 6.

It is this zone number that I add to the die roll to see which encounter the PCs run into.

However, I also keep in mind what animals and monsters are found in that area as well.

This means, there is more chance of encountering a beholder near Mt Doom than in the wilds around it, and no chance close to the stronghold.

This gives the PCs a sense of where the dangerous areas are by reinforcing it via the encounters they have.

It also allows you to see at a glance how dangerous an area is so you can telegraph that to your players.

Tied this together with the table I put together on what the creatures you roll up are actually doing when encountered, your random encounters can easily come alive and add to your world.